Scientific Aspects of Agnihotra: Purification of the Atmosphere by Agnihotra (Part 1)

Were we to highlight major problems facing our planet and all of its inhabitants, certainly air pollution would rank high on the list. As Agnihotra and Homa Therapy can easily be done by individuals and families, the solution to protect ourselves and our families is at hand. For a scientific rationale, an interesting article written by Dr. Ulrich Berk from Germany about how Agnihotra purifies the atmosphere follows:

The main statement of Homa Therapy is: Agnihotra heals the atmosphere – and the healed atmosphere heals the environment, plants, animals, and humans.

How can we understand that statement in terms of modern science? And then, as a second step, see whether modern scientific research can either confirm or refute such statements?

We will cover all these aspects of Agnihotra – effects on our environment (air, soil, and water resources), plant life including agriculture and horticulture, animal health and animal breeding, and human health in this and following articles.

Let us now begin with the effect of Agnihotra in purifying our air. We can distinguish three forms of air pollution: biological, chemical, and physical air pollution. Actually, there is one more form of pollution of our atmosphere – that is thought pollution. Although this perhaps is the worst form (as it leads to the other forms of pollution), we will deal with that aspect later on as a scientific examination is a bit more complicated.

Biological air pollution is the presence of pathogenic bacteria and viruses. Will this contamination be reduced by performing Agnihotra? Several studies have confirmed this assumption. The first of such studies was done in the eighties of last century at one Warsaw university, Poland. It showed that the bacterial count went down, starting right after Agnihotra. After 12 hours less than 10% of the original bacterial count was remaining. That would have been the time for next Agnihotra.

Alas we do not have a photo documentation of this early experiment. But we do have photos and data from replications – one was done at Fergusson College (one of the leading colleges in Pune, India) a few years back. The difference between before and after Agnihotra is obvious – although the “after” measurement was taken only half an hour after Agnihotra. 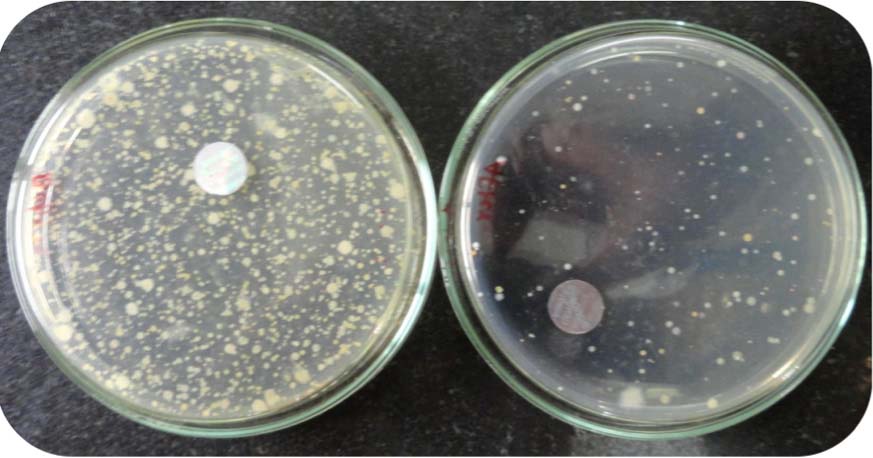 Chemical air pollution refers to chemical compounds detrimental to our health. Modern technology has brought a lot of such compounds into our homes, many of them potentially harmful for humans. A series of experiments was conducted recently at Vikram University, Ujjain, M.P., and at North Maharashtra University, Jalgaon, India. They tested the chemical compounds SOx and NOx which are produced by any form of combustion, and the levels are getting alarmingly high especially in cities because of all the cars with combustion engines. Also these experiments measured physical pollution, i.e. particle pollution. See the results:

The sampling was done with a high-volume air sampler which sucks in the air and then presses it through a filter. Particles are stuck in the filter, depending on the filter specifications.

Although the values go up a little bit after Agnihotra (which is to be expected as fire creates some level of SOx, NOx, as well as some smoke means particles), after some time all values go down well below the levels we had before Agnihotra, means Agnihotra purifies our air also from these chemical and physical pollutants. The experiments were done both at sunrise and at sunset in order to rule out any effects of normal variations between day and night.

Next step will be to do this experiment for one week, performing Agnihotra regularly morning and evening.

In the next article we will discuss how Agnihotra purifies water resources. A lot of interesting results!