Scientific Aspects of Agnihotra: Growth of plants in Agnihotra Atmosphere and with Agnihotra Ash (Part 6)

Seeing is believing, it is said. The following articles document, in some detail, the positive results of Agnihotra and Agnihotra ash on growth of plants, plant resistance to disease and pests, shelf life and other parameters of quality, taste and quantity.

It is difficult to underestimate the potential such data has for a world beset by climate influences causing difficulties to agriculture.

In the previous article we saw that Agnihotra Ash helps seeds to germinate better. The same result we get when seeds are kept for germination in a room where Agnihotra is performed regularly.

These are very simple experiments which everybody can easily perform at home also.

We again suggest that you try yourself – and then please also send us photos of your results.

Definitely the germination stage is very important for the life of plants. But unless we are just interested in sprouts it is important to see how plants grow further until they are harvested. Will plants also grow faster in the later stages, will there be a stronger resistance against diseases and pests, etc.? What about the quantity, the quality of the produce, the nutritional value, the shelf life? 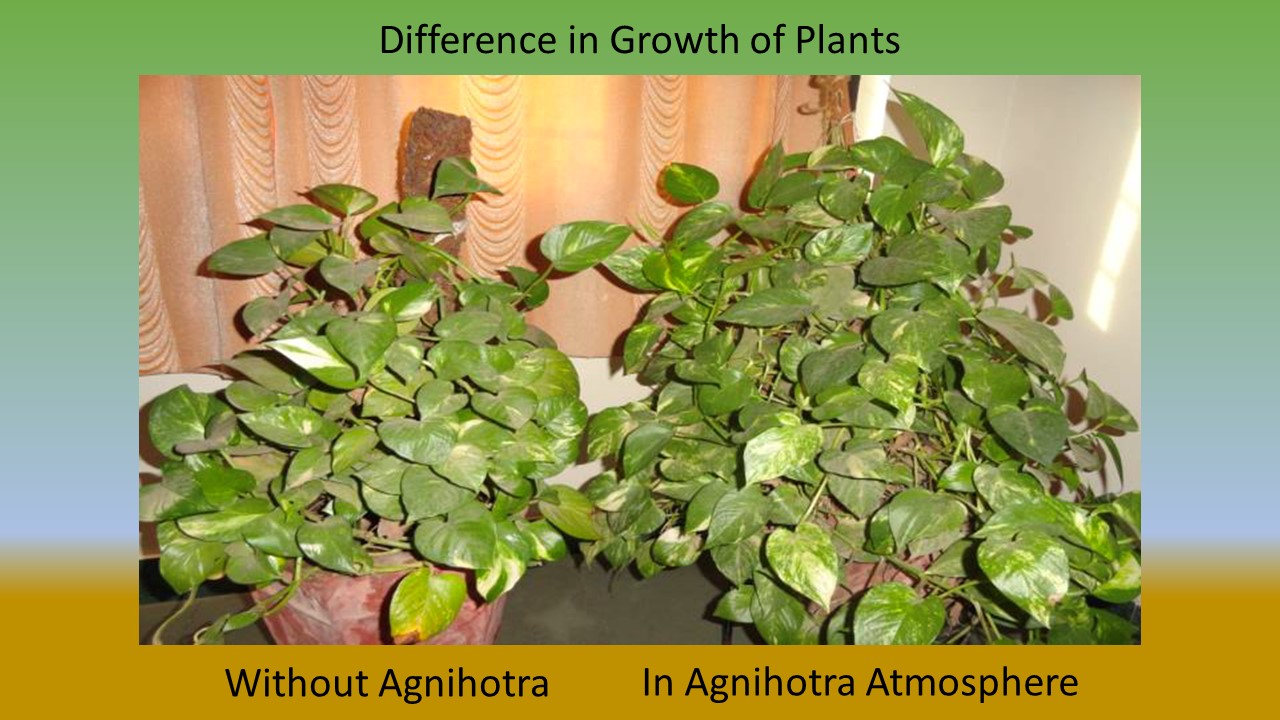 Although the experiment was not done under ideal conditions, still the different in growth of these two plants is obvious. Ideally for such an experiment there should be a difference of three kilometres – but in this case the two plants were grown in two different rooms of the same building, so also the first plant got definitely SOME of the Agnihotra effect.

This is just one example. More systematic research has been done by Dr. Selvaraj at the Institute of Commercial Horticulture, Tamil Nadu Agricultural University, Ooty, India. Yield, quality of the produce, and disease resistance were examined, comparing:

Following some of the results.

Effect of organic farming on growth and yield of Rose cv. Passion

Organic plus Agnihotra gave best results in all the parameters which were checked.

Flowers are normally grown in greenhouses, and because of high humidity fungal diseases are quite common. A study showed that Agnihotra can control one common fungal disease, powdery mildew (characteristic are white powdery spots on the leaves and stems).

Effect of organic farming on the incidence of Powdery mildew of Rose cv. Passion

Another experiment was done on potatoes. Yield and the occurrence of late blight were examined. (The disease late blight affects mainly potatoes and tomatoes – and which led to the Irish potato famine of the 1840s, two million people died or emigrated from Ireland then!).

Other salient findings were:

These were quite impressive results of the first systematic study on yield, health, disease resistance, and shelf life of plants.

In the next article we will look into