Okay, our attention has been focused on air and water pollution so far. Now let us look at how Agnihotra/Homa Therapy aids the soil- the substance on which the vast majority of our nourishment depends.

Earlier we had discussed how Agnihotra purifies our atmosphere and the water resources. Now let us have a look into the effect of Agnihotra on soil. Mostly people are not aware of how important soil is – although it is obvious that our lives depend on the thin layer of topsoil as we all feed on plants (even non-veg people do indirectly), and most plants need soil for growing.

Conventional chemical farming has led to a degradation of our soil on large scale. With Homa Farming techniques this degradation can be reversed and healthy, productive soil will be restored, on which healthy plants will thrive.

When you perform Agnihotra and the other techniques of Homa Organic Farming, following are the effects on the soil:

Some of these results have just been confirmed by observations. E.g. it was found that in Tapovan, a Homa Farm in India (the only place we know of where continuous Tryambakam Yajnya is going on for many years), in a very dry summer you had to dig half a meter deep to find moisture in the soil. On neighbouring lands you had to dig one meter deep!

Regarding other points scientific studies are available. One was done on one farm with highly alkaline soil, pH was 9.86. The land was divided into three plots. One was cultivated conventionally with agrochemicals; second plot was cultivated organically, using vermicompost; and the third one was cultivated organically with vermicompost and Agnihotra Ash. After only one season – approximately three months – you see that conventional farming did not change the pH, organic farming brought the pH a little bit down, but Homa Organic Farming nearly brought the pH back to nearly normal – IN JUST THREE MONTHS!

Interesting is that on the other hand with highly acidic soil, Homa Organic Farming brings the pH up as we have seen in Bhrugu Aranya, a Homa Farm in Southern Poland. Before Jarek and Parvati started farming there a government agricultural engineer came and tested the soil. The result was discouraging: pH was 4.4, and the agricultural engineer told that nothing will grow on this soil unless you add a lot of lime to it. For that, money was not available but still all kinds of vegetables were growing on this land just because of the Homa Atmosphere and adding of Agnihotra Ash. Some time later the pH was measured again and it had come up to 7.2. That means that Agnihotra Ash does not just push the pH in one direction – it brings Nature back to harmony.

Very important for soil health and soil fertility are biological properties. We have seen that earthworms thrive in Homa atmosphere. Earthworms are actually an indicator for healthy soil. But also different kinds of microbes are essential, e.g. phosphorus solubilizing bacteria.

All plants need phosphorus. However, regardless of how much phosphate is added to the soil, only the water soluble portion can be utilized by the plant. One study done long time ago by Dr. Tung Ming Lai, Denver, Colorado, USA, showed that water solubility of phosphorus in soil increased if Agnihotra Ash was added: 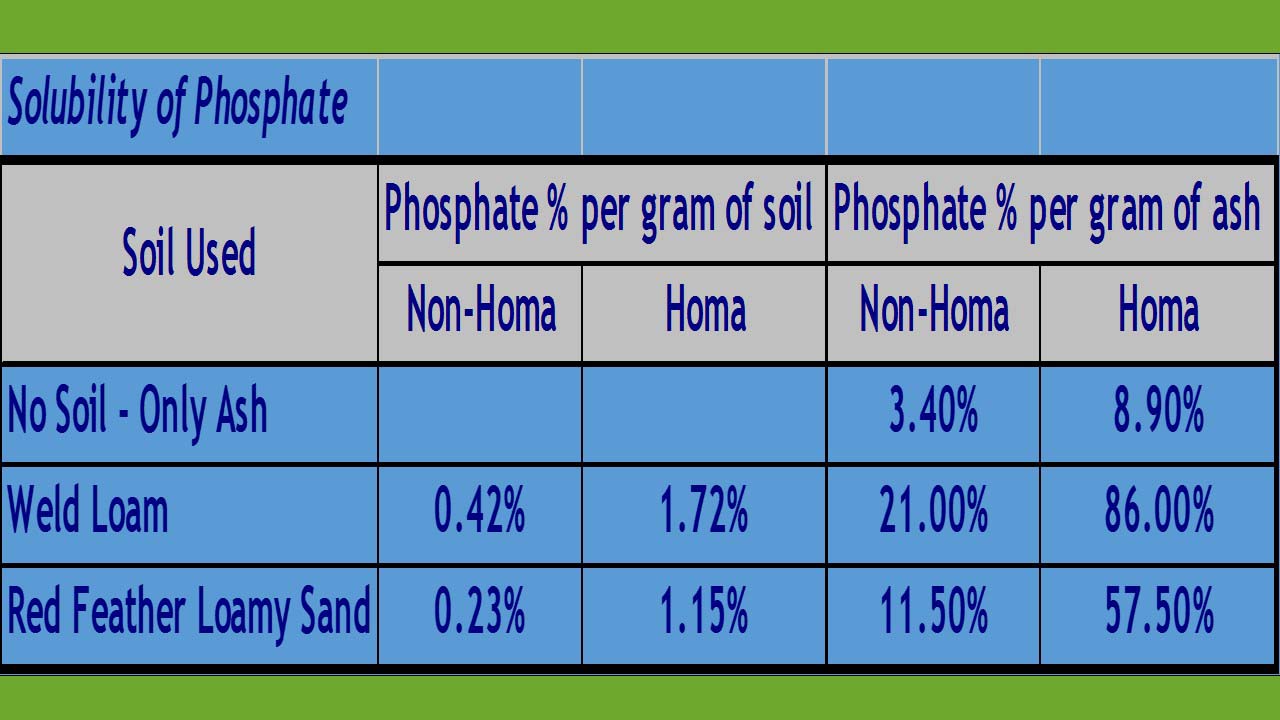 The question arises how this effect comes about. It is known that certain bacteria can help in turning non water soluble phosphorus into water soluble phosphorus, and the hypothesis was that Agnihotra Ash supports these bacteria. A recent study done in Ratnagiri, South India (a place famous for the Alfonso mangoes) confirmed this hypothesis: By adding Agnihotra Ash the count of phosphate solubilisers increased 1000 fold.

Another kind of useful bacteria in soil are nitrogen fixer. Their count increased 100 fold. This explains why in Homa Farming it is not necessary to add chemical fertilizers. The following graphics shows the comparison of useful bacteria with and without Agnihotra Ash (using different media to cultivate those bacteria for measuring): 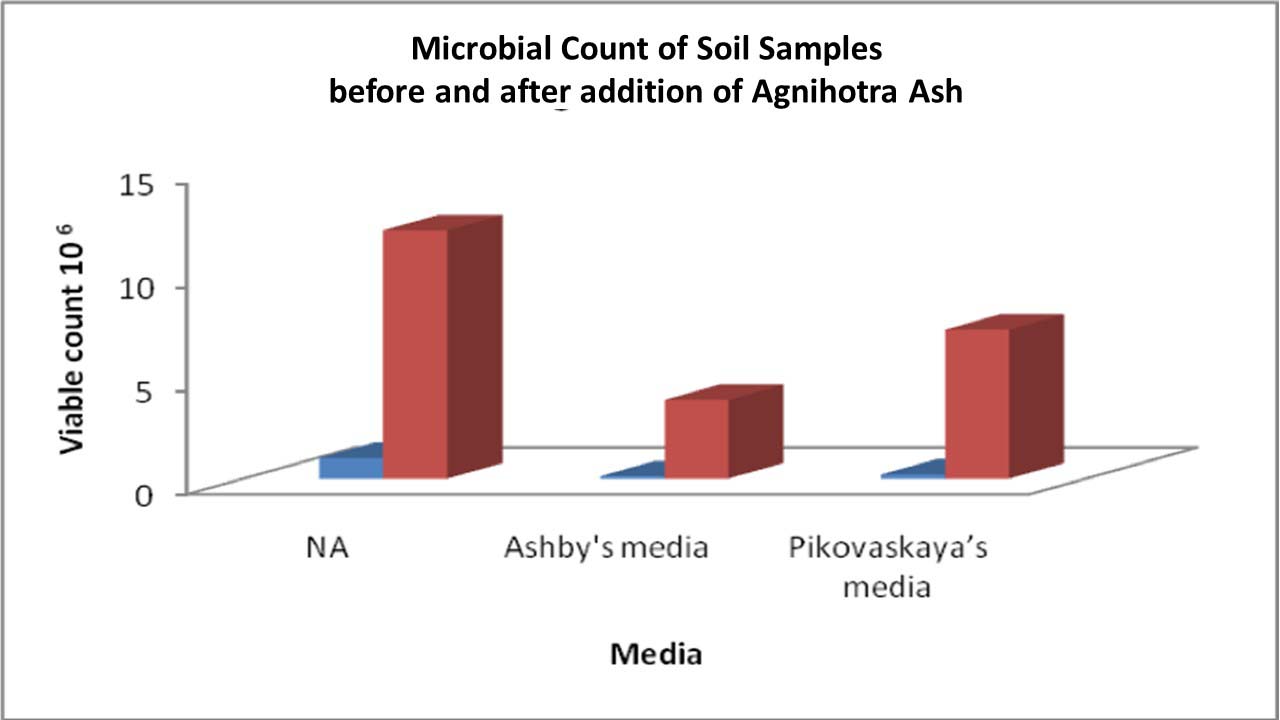