Quantity of food worldwide–especially in developing countries–continues to be an urgent issue.
Quality of food in developed countries–especially in the age of the spreading of the GMO scourge–is a less publicised issue (in part due to obfuscation by vested interests).
In both cases the proven potential of Homa Organic Farming in yielding greater quantities and quality of food should not escape the notice of all.
See the following article for effects of Homa on seed germination–the first step in our food chain.

The easiest way to experiment about that is by examining the germination of seeds, both in Agnihotra atmosphere and using Agnihotra ash.

Quite a number of such experiments have been done, some of them already quite some time ago.

Germination of rice seeds were part of two Ph.D. theses done at the Vivekananda University in Bangalore in the first years of this millenium. Rice seeds were put in petri dishes on top of a filter paper which was soaked in water. Agnihotra was performed, and  root length, shoot length, fresh weight, and dry weight were measured and compared with control. There were three controls: One without any disciplines of Agnihotra, one with just the mantras, one with Agnihotra fire but without mantras and offerings. Result was that Agnihotra lead to a significant increase of root length, shoot length, and fresh weight compared to control. Also it was obvious that the effect of Agnihotra is more than the added effects of mantras and the fire alone.

Interesting that one study specifically examined whether it makes a difference whether a male person or a female person utters the mantras. No surprise that there was no difference – which hopefully helps to remove one prejudice still prevalent in some countries.

The authors attribute the positive effects of Agnihotra on seed germination to the Agnihotra fumes. This seems to be a premature assumption – in experiments on water purification we could show that water gets purified even when the water bottles are closed (and no fumes get into touch with the water). That means there must be some energy field around Agnihotra which leads to this effect. About this Energy Field of Agnihotra we will talk in a later issue of this newsletter.

The effect of performing Agnihotra in a room where seeds are kept was subject of these two studies just mentioned. Other studies examined the effect of Agnihotra Ash on the germination of seeds. One quite comprehensive study was done a couple of years ago in Fergusson College, Pune, India. Again the seeds were kept on some filter paper in petri dishes. Watering was done with:

(Control ash is the ash you get by burning the same ingredients as used for Agnihotra – but without the disciplines of Agnihotra: No mantras, not done at sunrise or sunset, and the vessel – although made from copper – does not have the pyramid shape of our Agnihotra pyramid.)

Seeds of vigna aconitifolia (mat bean) and vigna unguiculata (cow pea) were taken as experimental material. Seeds were allowed to germinate and germination was observed every 24 hrs.

The results show clearly that control ash improves rate of germination as compared with plain water, but Agnihotra ash does so much more:

After getting this encouraging first result, more experiments were done, trying to figure out whether all the different disciplines of Agnihotra are really necessary to get the full effect. For that, variations of the different parameters were used:

Fires were done with altogether 48 different combinations of these parameters, and the resulting ashes were used for germination of mung beans, providing same environmental conditions. After two weeks plant growth was measured by considering shoot and root length and put in some graph: 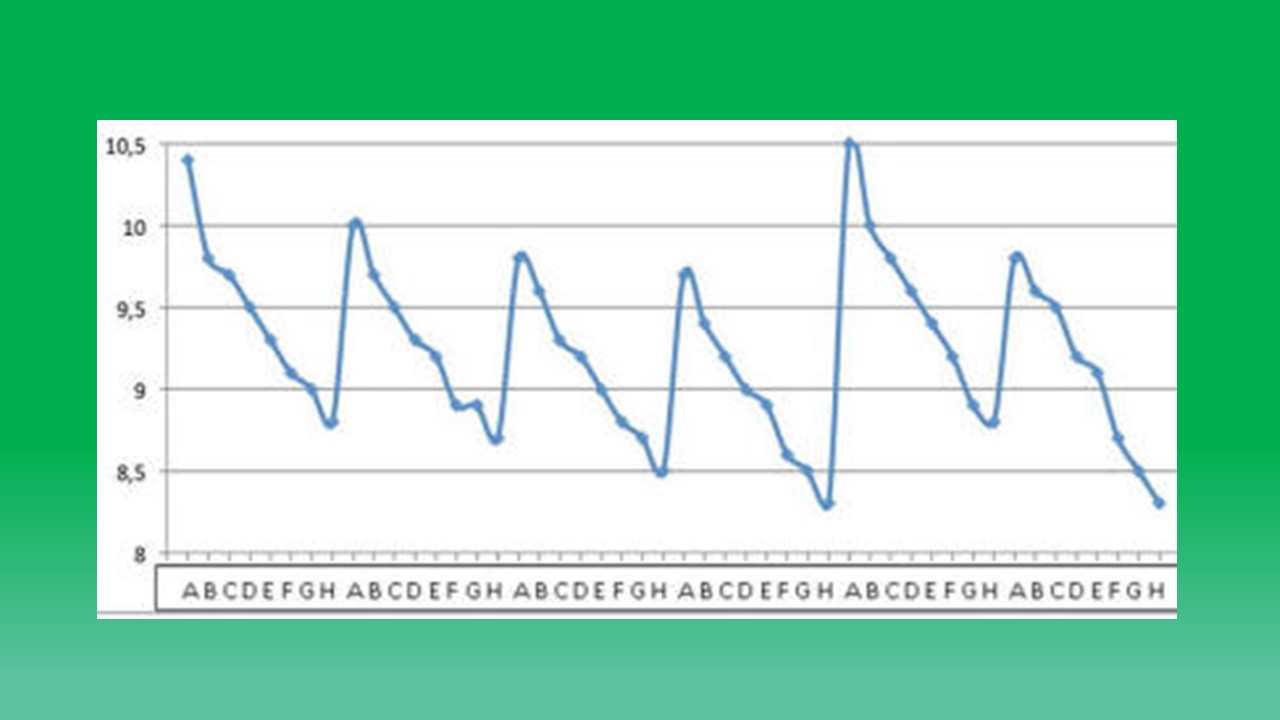 The peaks are there when all the disciplines of Agnihotra were properly followed. You can clearly see – if you make any change, the results are worse than performing Agnihotra properly.

Means we really have to be exact in our practice of Agnihotra!

Germination of seeds has also been done adding Agnihotra ash / control ash / plain water after the seeds were put into soil (and not just kept on filter paper on petri dishes). Results also clearly showed that Agnihotra ash gives better germination (root lenght, shoot length, total weight) than control ash . Control ash gave better results than plain water which is not surprising as any ash contains certain nutrients. Surprising though is the difference between Agnihotra ash and control ash – as these two ashes do not show a significant difference in chemical analysis! This will be topic of  further discussion.

As sprouting experiments are relatively easy to do, some have been done on school level also. Some time ago by Boumika Patil (Amalner, India) did this for some contest in the field of environmental studies, and her project won the first prize! See her photo. 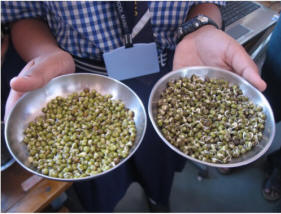 Also you  can try similar experiments at home. Will be quite interesting to see yourself! And please send photos of your results.