Since more than a decade now a dramatic decline of bee population has been noticed
worldwide. Now we learn that a similar decline can be found regarding all insects.
Recently an alarming study was published by scientists from Germany, Great Britain, and
the Netherlands. Insects were captured in nature reserves throughout Germany and
counted. This long-term study found that within 25 years there was a reduction of 75%!
Hans de Kroon, at Radboud University in the Netherlands who led this research
commented:
“The fact that the number of flying insects is decreasing at such a high rate in such a large
area is an alarming discovery.”
Prof Dave Goulson of Sussex University, UK, also part of the team conducting this study,
added: “Insects make up about two-thirds of all life on Earth [but] there has been some
kind of horrific decline,” “We appear to be making vast tracts of land inhospitable to most
forms of life, and are currently on course for ecological Armageddon. If we lose the
insects then everything is going to collapse.”
(More details you find e.g. here)

The reasons for this dramatic reduction of insects are not clear yet as that was not part of
the study. Important reasons seem to be
– the increasing use of pesticides in agriculture
– monoculture is practiced on large areas
– there is a reduction of hedges, bushes, and forest rims around agricultural fields
– even light pollution may play a role as it interferes with the normal rhythms of diurnal
and nocturnal insects
– Herbicides like glyphosate kill all plants except those which are genetically modified
to resist this substance. Total loss of plant biodiversity on areas where such herbicides
are used.

What is biodiversity?
Although this recently documented reduction of insects itself shows a dramatic loss of
biodiverstiy (which one of the scientists involved in the study considers as „ecological
Armageddon“) this is just one aspect of the loss of biodiversity which we face. So let us
have a more general look: What is biodiversity – and why is it essentially necessary for the
planet?

Biodiversity is the shortened form of “biological diversity.” It refers to all the variety of
life that can be found on Earth (plants, animals, fungi and micro-organisms) as well as to
the communities that they form and the habitats in which they live.
There were several conferences organized by United Nations on Biological Diversity
starting in 1989. In June 1992 during United Nations Conference on Environment and
Development held in Rio de Janeiro (the Rio “Earth Summit”) a Convention on Biological
Diversity was passed later on signed by many countries. This Convention defines
biodiversity as “the variability among living organisms from all sources including, inter
alia, terrestrial, marine and other aquatic ecosystems and the ecological complexes of
which they are part; this includes diversity within species, between species, and of
ecosystems.” (https://www.thegef.org/topics/biodiversity) 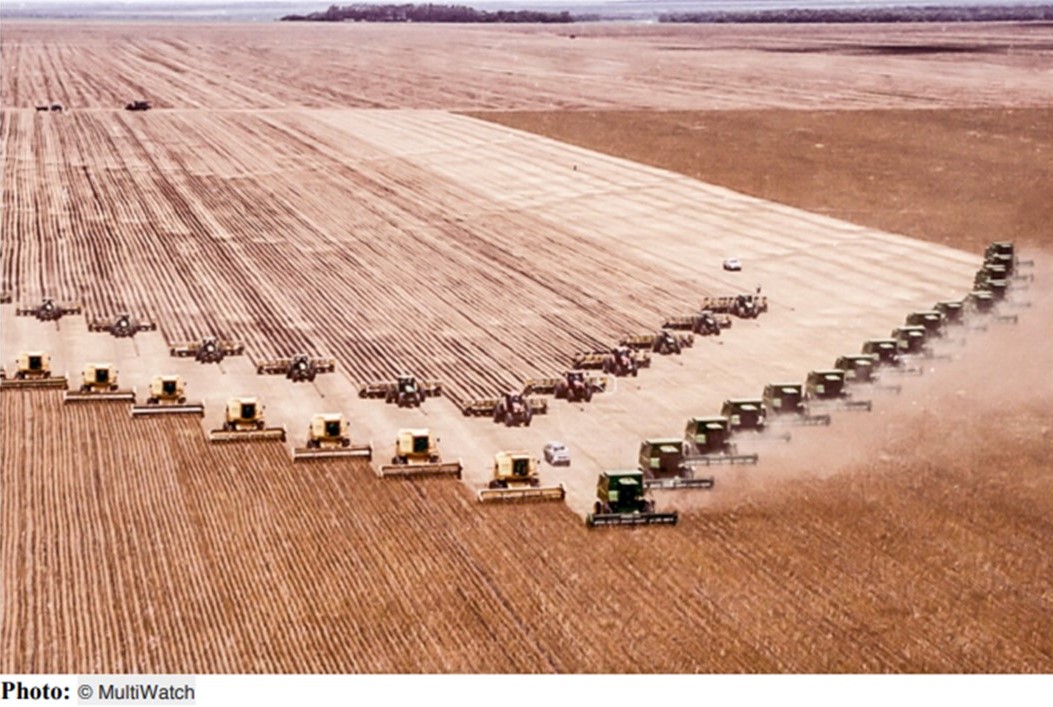 Why is biodiversity important for us humans?
Monoculture seems to be a result of a thought pattern which reduces Nature to just
supplying food, water, timber, and fibre for humans. E.g. on huge areas corn or cotton is
grown – any other plant will be seen as unwanted weed and tried to eliminate. Same with
insects etc.
But Nature does not work that way. In Nature, there is no monoculture. Always there is a
great variety of plants, microbes, insects, and other animals which interact and coexist in
harmony.
Science is just at the beginning to analyse and understand this multi-layered system of
interactions and interdependencies.

Even when we comparing Nature to a complicated machine (of course Nature is much
more than that) it is clear that interfering in one place may have repercussions at many
other places (which we may not always foresee). Following model is from
www.panda.org:
„Our planet is simply amazing.
Viewed by someone not from our world, it could be seen as one big, finely tuned and
ultimately incredible machine.
Lots of cogs, pullies and wheels (animals, plants and environments) working together.
Depending on each other in so many ways. Creating a green, blue healthy world that you,
us, everyone depends on.
For food, fuel, medicine and other essentials that we simply cannot live without.
Sure this machine can take some knocks and bruises.
It can bounce back.
Stretch. Adapt. Mend.
It is part of what makes it so marvelous.
But we’re beginning to pull and stretch it further than it has ever been stretched before.
We’re entering unknown territory where some of the extinctions we are causing may have
deep and profound effects on how we live our lives.
In the grand time scale of our planet, these effects may be currently seen as the equivalent
of storm clouds gathering on the horizon.
But rest assured, the storm is coming.
Unless we learn to start loving and caring for what our planet already gives us.“
(http://wwf.panda.org/about_our_earth/biodiversity)

How does Homa Organic Farming help to calm down this „storm on the horizon“, to bring
Nature back to Harmony, to restore biodiversity?
Reports from farmers and scientific studies give some answers.
Let us start with an observation Rita and Thomas Hirt made on their Homa Farm in
Rippistal, Switzerland. When they started the farm one big problem was that the meadows
were widely covered with a tall growing weed, the broadleaf dock (Rumex obtusifolius). A
few of these plants are o.k., they can even be used as medicine. But as these meadows are
used for cows who graze there in summer and hay is made for winter, it was a problem
that large areas were covered by broadleaf dock, making these areas useless.
All neighbouring farmers had the same problem – but they used herbicides to control the
broadleaf dock. Not possible on a Homa Farm – and as we have seen this may solve one
problem, but create more other problems as it brings Nature more away from Harmony.
Interesting what happened after some time of performing the Homa fires and spraying
Agnihotra Ash water: Green dock beetles (gastroidea viridula) arrived in large number
and controlled the broadleaf dock.

These beetles were not found on the meadows of neighbouring farms. This is an example
how on a Homa Farm biodiversity is restored and automatically beneficial insects arrived.
This also reminds on the experience which Abhay Mutalik Desai had on his farm where
woolly aphid was controlled by two natural predators – Micromus igorotus and Dipha
aphidivora (see the article on pests and diseases). 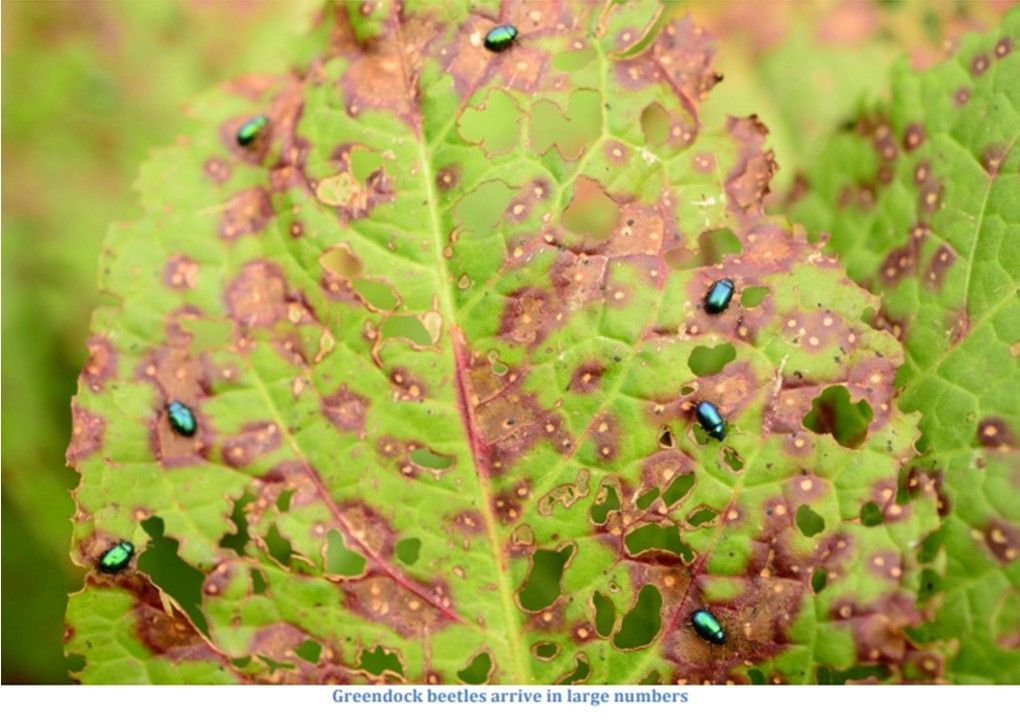 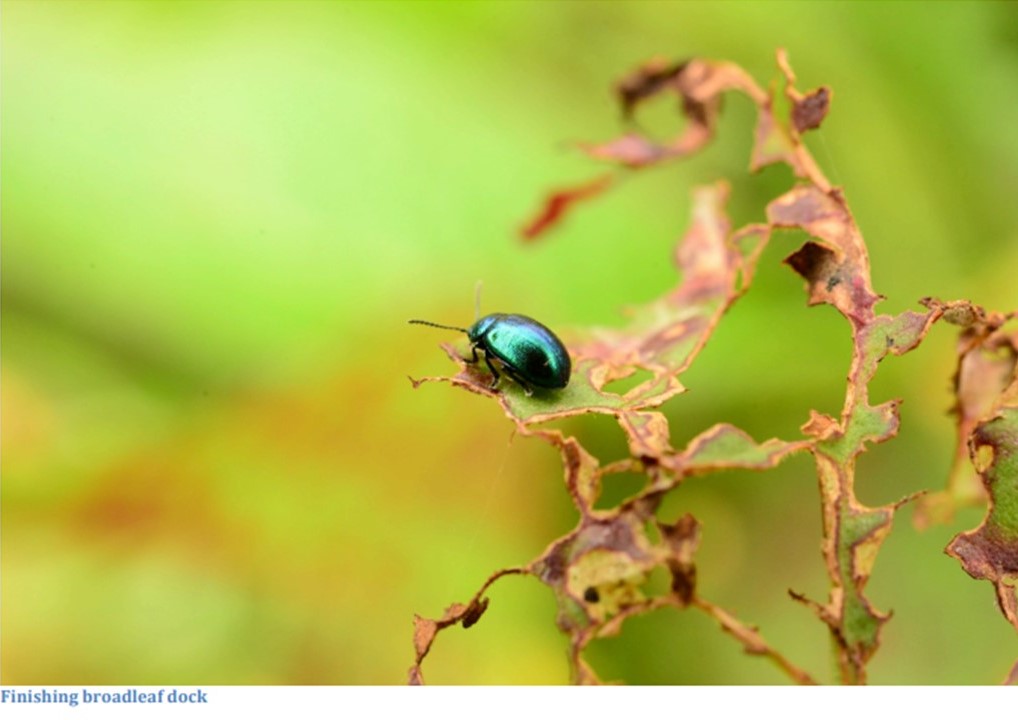 At Palampur Agricultural University (in Himachal Pradesh, India) some groundbreaking
studies on Homa Farming were done. The studies were on yield and quality of medicinal
plants as well as on soil health. Results were very positive (see the article “Soil and
Agriculture 2”). In addition to that following observations on various aspects of
environment (land & biodiversity) were made:
• Spread of White clover (trifolium repens) (Legumes) & Kikyun (pennisetum
clandestinum) grasses (Soil binder) increased in farm.
• Weeds problem a little bit suppressed .
• Frequency of occurrence of Brahmi (centella asiatica) increased naturally in farm.
• Birds diversity and their frequency of visit has been increased
• Friendly insects occurrence has been enhanced.
• Robust health of plants, animals and microbes.

“Earlier experiments had shown significant effects of Agnihotra ash treatment on the
structure of algal/macrophyte/invertebrate communities in aquatic microcosms. Then, to
assess Agnihotra effects on survival and growth of Rana temporaria tadpoles, freshly
hatched ones were placed in water containers with algae, macrophytes and decaying plant
debris, with addition of Agnihotra or non-ritual ashes of the same substrate against
control tanks, placed each in triplicates at an Agnihotra and an organic farms in Southern
Poland.
Agnihotra ash treatment significantly increased growth of tadpoles by 17-32% and
reduced their mortality. With non-agnihotra ash the mortality was even higher than in
controls. Also, significant differences in final yield of diatoms, filamentous algae, plants
and in decomposition of plant debris were found. Agnihotra atmosphere may be
responsible for faster development and emergence of frogs. This is consistent with
observations of Agnihotra farmers who claim their crops ripe earlier and more
simultaneously than in conventional neighbours’ farms.
Although the mechanisms of Agnihotra effects on biota are not fully known, some
explanations are proposed. Further studies are needed on more endangered species, and
on treatment of chytridiomycosis, as Agnihotra ash is often considered an effective remedy
against fungal diseases. As many Agnihotra farms are located in or near global
biodiversity hotspots, they may contribute to conservation of endangered amphibian
populations living there.”

Recently biodiversity along the river Narmada in India was studied systematically under
the guidance of Dr. Shailendra Sharma, Principal, AIMS College in Damnod, Madhya
Pradesh. One study was about the bottom fauna of the river – analyzing the number of
various types of invertebrates in the mud from the riverbed.
For biological analysis the mud samples stored in bottles were immediately transferred to
the enamel trays for sorting and separation of individual organisms from the debris. The
bigger animals were picked up by forceps and were counted separately as number/m2.
The small animals were isolated by centrifugation, sieving and floatation.

Near the Homa Therapy place there is a very significant increase of all different types of
invertebrates – from plus 42% to plus 300%! 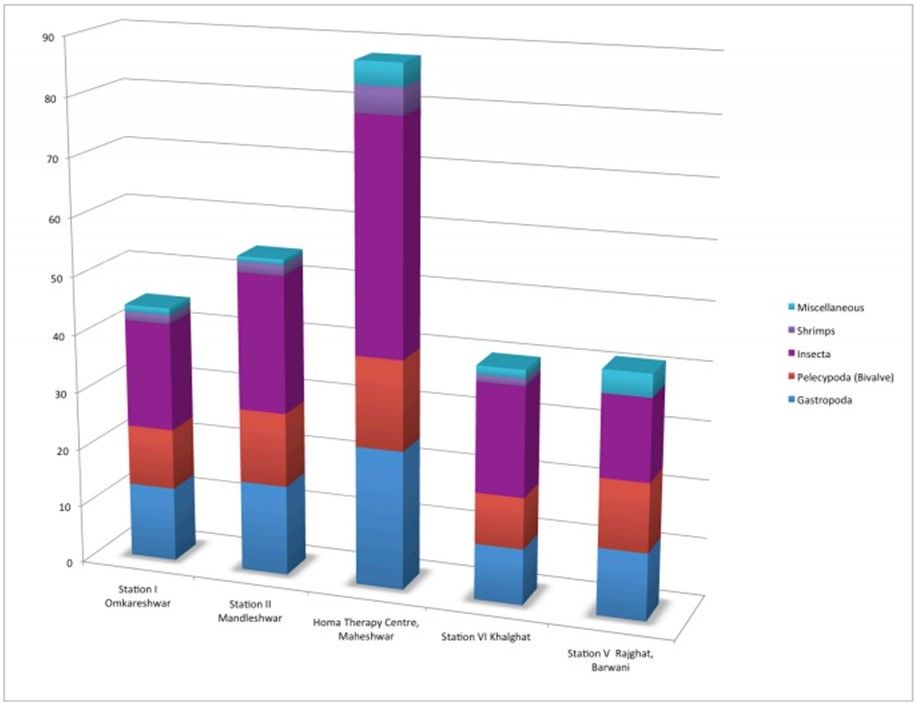 A second study examined the number of different butterflies at three stations along the
Narmada River. 32 different species of butterflies were counted at these three places. One
of these places was the Homa Therapy Centre near Maheshwar – and here an average
increase of 68% was observed!
Really astonishing is that in all the different species, the number at this Homa place was
highest. 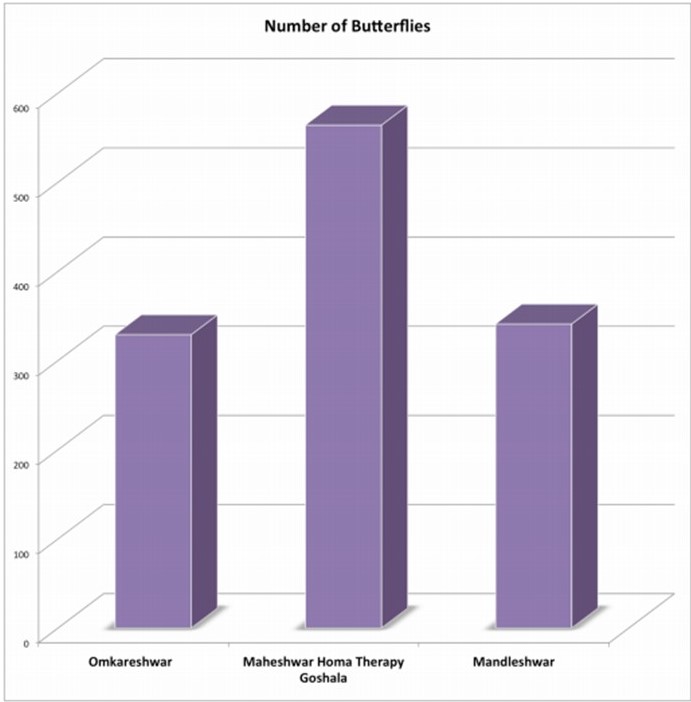 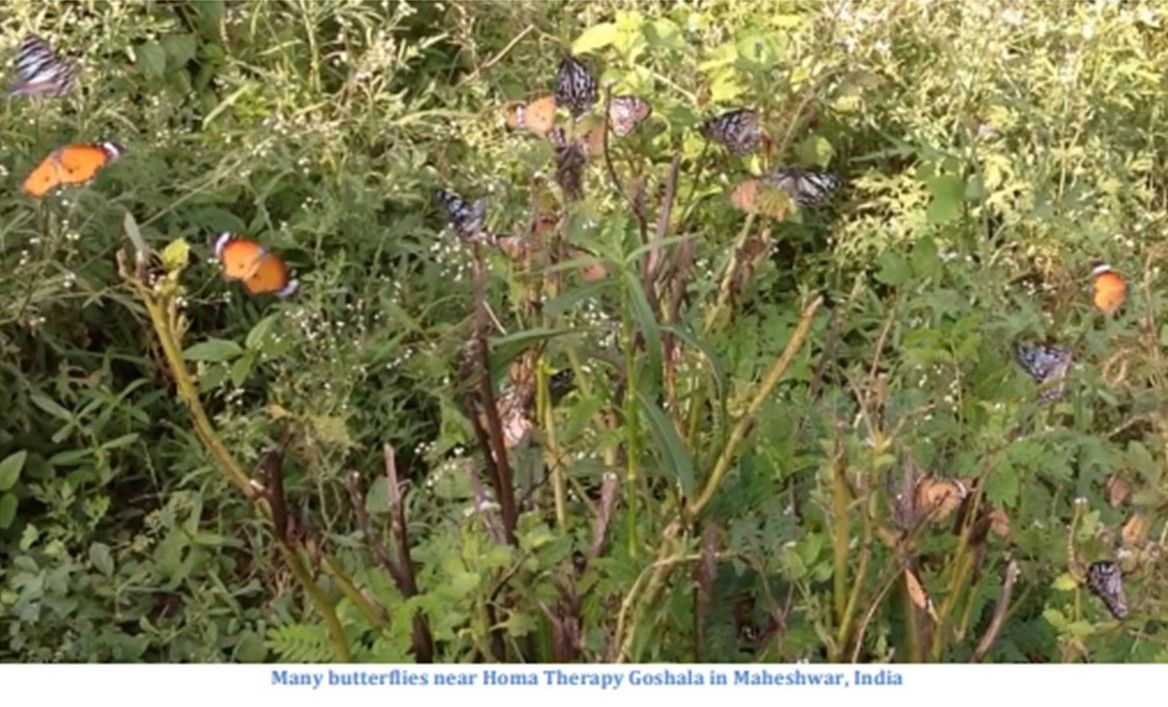 One observation many people have made who came to Homa Farms or other Homa
Therapy places the first time: The number of different varieties of birds astonishes them.
But that has not yet been scientifically studied – will be good if some ornithologists look
into that matter!