In this series of articles we have covered so far the effects of Agnihotra on our
environment (atmosphere, soil, and water resources) and also the use of Agnihotra in
agriculture / horticulture.
Now let us look into the effect Agnihotra has on animals and how it can be used for
animal husbandry. The first animal which comes to mind are cows.
Cows supply us with cow dung and milk from which we prepare cow’s ghee. Without
cows there would be no Agnihotra, no Vedic Yajnyas. Can cows also benefit from
Agnihotra?
Experience of many farmers show that the health of cows improves considerably in
Homa atmosphere. Also it was noticed that cows on Homa farms are more peaceful as
compared to neighbouring farms. Some examples:

Monika Koch, a German pharmacist, developed medicines based on Agnihotra Ash
which are used with all kind of human diseases showing wonderful results.
When the farmer from whom they got their cow dung said that one of his cows was
troubled by eczema she tried Agnihotra Ash. Nothing else had helped, but the ash cured
the eczema within a few days.
Another cow did not want to eat and got very weak – they added Agnihotra ash to the
fodder, the cow started to eat and got strong again soon.

Nene was a young bull at a cattle breeder in farm in Amazone area, Chile, South America, worth Thousands of Dollars. He got the viral disease PIROPLASMOSIS which is transferred by ticks.
Medicines did not help and Nene could not get up any more, was close to dying.
Someone treated him with Agnihotra ash and with Agnihotra ash water. Next day he was up again, ate and got totally healed only with Agnihotra medicine.

Wenda Shetala as small child freed some calves meant for slaughter and hided them all
night in the forest.
When found, she was beaten up severely. But she vowed to create a refuge for cows when
grown up.
This she now created such a refuge and often gets old and sick cows.
She performs Agnihotra regularly on this farm and all her treatments are with Agnihotra
ash and with homeopathic medicines only.
Two years ago she also came to India for exchange of experience.

There are many more such reports showing how cows were healed with Agnihotra and
Agnihotra Ash. But till now there is only one systematic scientific study in this field.
This experiment was conducted at the Zoological Department of the National Agricultural
University in Tingo Maria, Peru, for a period of 18 months. It shows that in Homa
atmosphere there is a considerable improvement as compared to control in the following
respects:
* Reproductive Index
* Cow’s and calf’s mortality
* Muscle development
* Weight at birth
* Placenta Retention
* Cow – calf separation 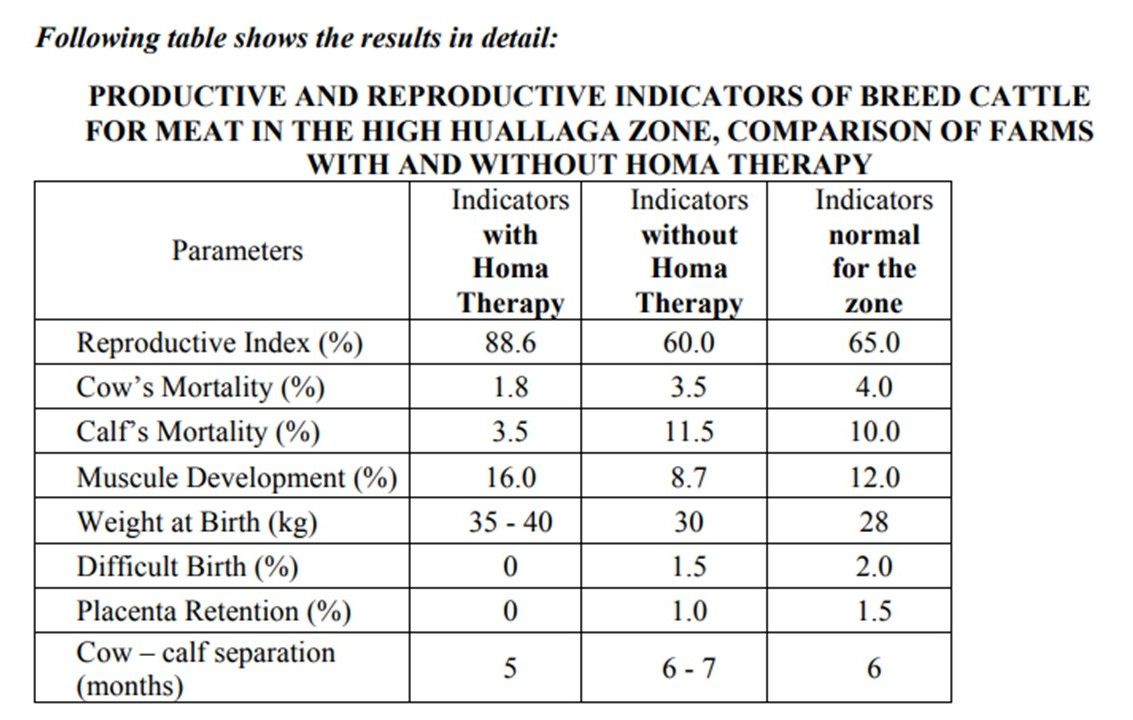 This is a very interesting first study showing the positive effect of Agnihotra on health and
reproduction of cows compared with non-Homa farms.
Would be good if such a study could be replicated, also comparing milk production as
well as the fat content of milk as additional parameters.