We previously have discussed two of the three best farmer’s friends: Cows and bees.
The third of these animals are earthworms. Earthworms play a decisive role in
improving and maintaining good soil health – and as we have seen before soil health
is of utmost importance for survival of mankind (see the articles on Soil and
Agriculture). And as already now 25% of fertile soil has been degraded in the last 50
years, regeneration of soil is a big challenge for farming. Earthworms can help with
that a lot.

They play a key role in improving soil structure and soil fertility and thus lead to a
healthy soil. They consume organic matter on the soil surface or in the soil. This
matter is digested in the earthworms’ bodies and turned into a very good organic
fertilizer .
Earthworms improve biological, chemical, and physical properties of soil:

Biological
Earthworms digest all different kinds of organic plant material and break it down to
nutrient-rich humus. Also the population of beneficial microbes is increased and the
microbial activity is stimulated.

Chemical
An earthworm consumes minute soil particles which are broken down and then
excreted in the form of casts. According to informations from IFOAM, these casts
contain five times more nitrogen, seven times more phosphorus, eleven times more
potassium, and two times more calcium and magnesium than soil without
earthworm population. Also trace elements become more available to plants by
earthworm activities.

Physical
Earthworms improve the structure of soil in several ways:
– They create tunnels deep into the soil (which last much longer than the
earthworm lives). These tunnels allow water to penetrate deeper into the soil.
Thus water holding capacity of soil increases.
– They break down clumps of soil by eating through these clumps.
– The earthworms’ cast (the worms’ excretion) helps to create stable soil
aggregates.
– They help undoing the effects of soil compaction.
All this shows that earthworms are really very valuable farmer’s friends. Shree
Vasant remarked once, “They work night and day and do not form ‘laborers’ unions’
to charge higher salary. They do their job for free.”

Impact of conventional (chemical) farming
But now this job is getting more and more threatened – not by strikes but by methods
of conventional farming. Problems are ploughing and tilling as well as use of
pesticides and chemical fertilizers.

Studies showed that some pesticides are lethal to earthworms even at levels much
lower than the recommended agricultural doses. But even if not lethal these
pesticides and chemical fertilizers have a devastating effect on earthworms. Their
size is reduced (and therefore they convert less organic matter into useful humus),
and also their reproduction is happening at lower speed therefore the numbers of
earthworms in the soil will be less. That can be easily seen on fields where
conventional farming is applied. As a consequence soil health degenerates.

The role of Homa Organic Farming
How to restore soil health and for that make best use of earthworms? Homa Organic
Farming offers a solution.

Shree Vasant Paranjpe wrote in the book „Homa Therapy – Our Last Chance:“
„The entire ecological system is benefitted by YAJNYA. For example, earthworms
are able to generate more moisture in the soil due to performance of YAJNYA. The
YAJNYA makes them happy and their hormone secretions increase, thereby
benefitting the soil and therefore the plants that live in the soil. The earthworm is
important to farming. YAJNYA atmosphere increases the hormones in earthworms
involved in their reproductive organs and helps multiplication of the species which in
turn helps the soil to become more rich.“

Alas, we have no scientific studies so far about earthworms in Homa Atmosphere.
But a there are several reports of Homa Farmers. Results are:

In Homa atmosphere, earthworms:
– Generate more moisture in the soil
– Increase the hormones secretions in their reproductive organs enabling them to
reproduce at a faster rate
– With Homa, in less than one month, the number of earthworms doubles. Normally,
this takes from three to four months.
– This is part of the bio-feedback effect from Nature which is obtained with Homa
technology.

That earthworms grow bigger you see on these two photos which show earthworms
found in the soil of the Homa Farm Shreedham of Christa and Ricardo Mena in
Algodonales, Spain. 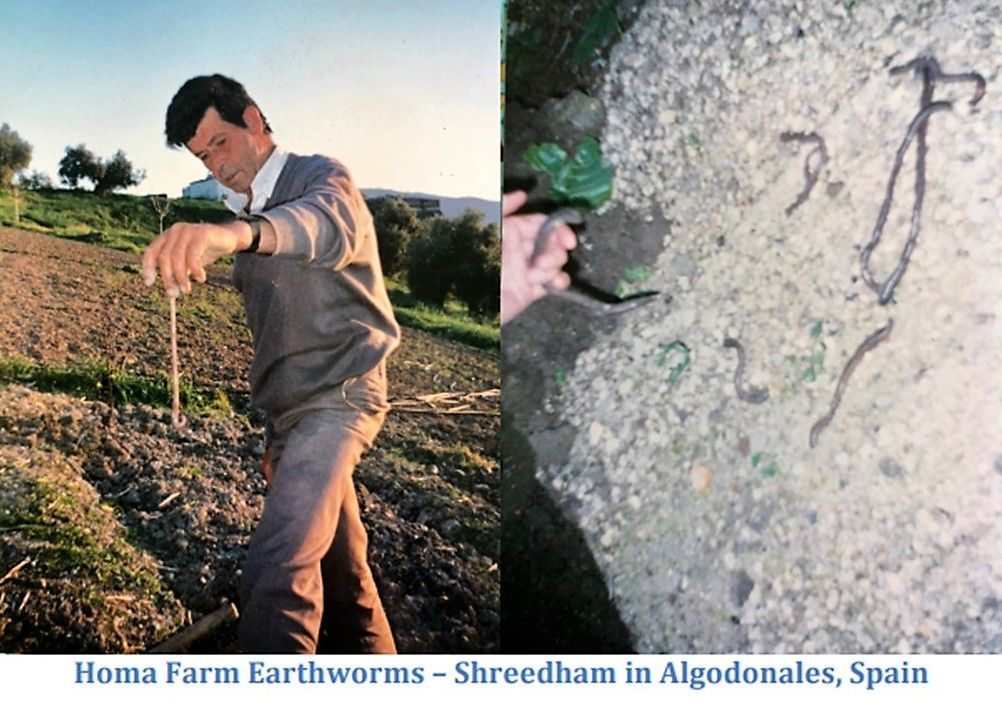 As in Homa Atmosphere earthworms multiply faster, grow bigger, and also the cast
has some additional beneficial properties because of the specific hormone secretion,
it is advisable to have a vermicompost unit on every Homa Farm.
In hot Indian climate it takes normally 42 days until vermicompost is ready for use:
In Homa Atmosphere it only takes half the time!

During the composting process in Homa atmosphere, an exquisite fragrance is
produced, which permeates the whole environment, contributing to the healing.
This pleasant aroma attracts pollinators within the area.

This Homa vermicompost can be used to prepare Homa Biosol – a very powerful biofertilizer
which Homa farmers can produce themselves on their farms. The
extraordinary results scientists observed using Homa Biosol on different crops like
tomatoes, cabbage, soybean, and okra were described in previous articles.

Below: Sanjay Patil, manager of Tapovan Homa Organic Farm in India, shows how
to set up a vermicompost unit. 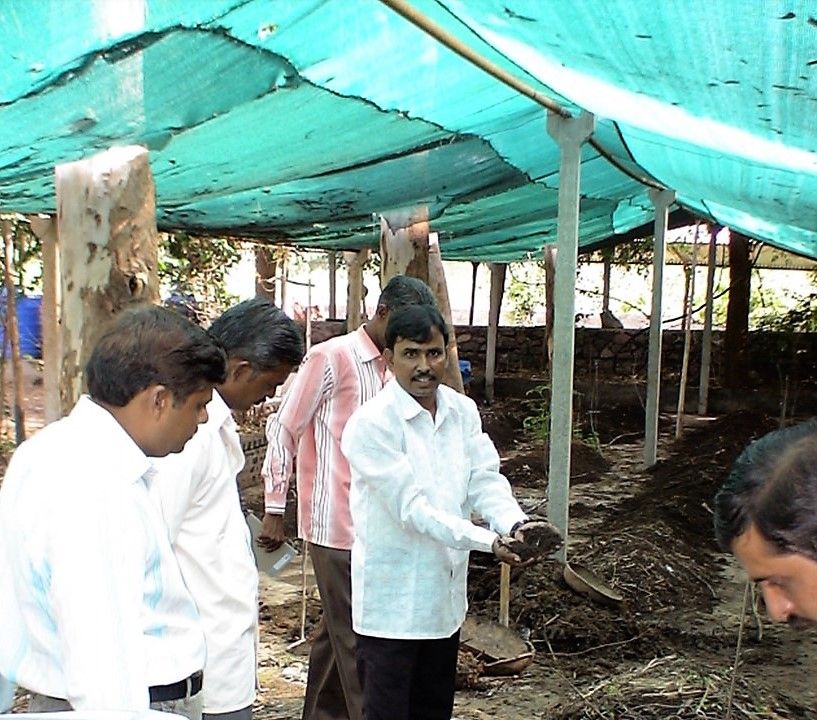