Agnihotra and Homa Therapy have a profound effect on all Nature, bringing it back to
Harmony. This also means there will be beneficial effects in the animal kingdom. So far
we have concentrated on the three best farmer’s friends: Cows, bees, and earthworms as
these play a crucial role in agriculture (and that also means for feeding all of us). Now let
us have a look at several studies which were made on the effects of Agnihotra and
Agnihotra Ash on fish.

Fish in aquaria
The first such study was done long time back in Poland, still in the communist time. It
seems normal that when fish are put in a new aquarium – a new environment – a
substantial percentage dies because of that change. This is a problem especially for shops
dealing with ornamental fish – each time a new delivery comes there is some loss.
Dr. Ustrzycki, a physicist from Rzeszow in Southern Poland, learnt about this problem and
carried out a simple experiment: He measured the mortality of fish when put in another
aquarium comparing three different methods for reducing the loss:
1. Agnihotra was performed in the room (but no Agnihotra Ash added – only the
effects of Agnihotra in terms of physics should be examined, not any chemical
effects).
2. Conventional medicine which are usually applied in this situation.
3. Bioenergetic treatment – a trained person sending healing energies.

Clearly it can be seen that performing Agnihotra leads to a much lesser loss than the other
two methods used. Would be interesting to see what happens if additionally Agnihotra
Ash would be added to the water.

There are a lot of reports also from people who keep fish in aquaria at home. Results are
less mortality and also water quality is much improved.

Toxicological studies
Industrial effluents are often quite toxic – sometimes to that extent that biotic life is no
longer possible, fish cannot survive in that environment.
In 2000 a study was made in Mumbai on the effect of Agnihotra Ash on water and biotic
life when industrial effluent from textile process industry was present in the water.
Different concentrations of effluents were prepared. Ash dose was given and fish were
kept under observation for 48 hours.
Biotic life was absent in 15% effluent.
But if 0.5 g of Agnihotra Ash per litre was added to the concentration of 15% effluent,
biotic life was possible again.
For a concentration of 20% effluent 2 g/litre Agnihotra Ash had to be added in order to
make biotic life possible.

This shows that Agnihotra Ash helps fish to survive even in highly polluted environments.

Healing of fish with Agnihotra Ash
At Holkar Science College in Indore a Master Thesis was completed comparing the effects
of Agnihotra Ash and conventional medicine on diseased fish. Gold fish with white spot
disease (caused by the protozoan parasite ichthyophthirius multifiliis) were divided into
two groups of eight fish each and put separately in two identical aquaria. Water quality
was same in both aquaria, also shape, quantity and quality of water plants was same.
(Megha Kale, APPLICATION OF AGNIHOTRA ASH AS INNOVATIVE THERAPY IN
SKIN WOUND HEALING IN GOLD FISH, thesis submitted as partial fulfillment for the
degree “MASTER OF PHILOSOPHY IN ZOOLOGY” at Govt. Holkar Science College
Indore, Madhya Pradesh, India.)
A) The first group was treated with Agnihotra Ash only One teaspoon of Agnihotra Ash
was added to the water every day.
B) Second group was treated with NaCl and Copper sulfate (which is the common
treatment for this kind of disease).
Both groups of fish were fed the same food supplement. Also environment (temperature,
light, etc.) was kept same. 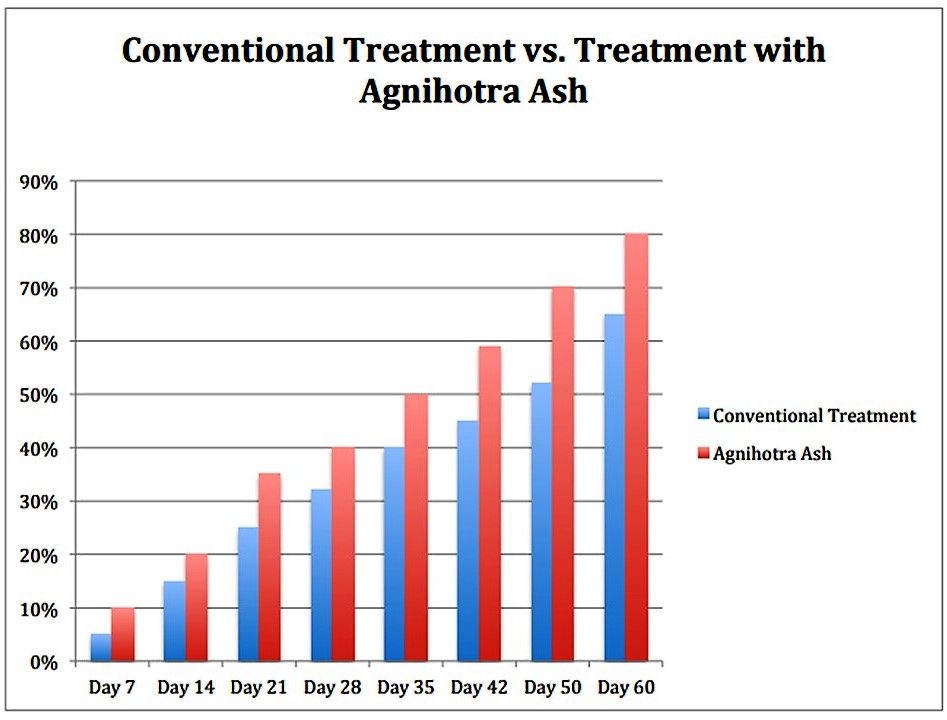 Analysis of Agnihotra Ash:
How does this healing of the white spot disease come about? An analysis
showed that Agnihotra Ash contains all the trace elements which are required
for wound healing in skin of Gold Fish. The appropriate combination and
utilization of metal/trace elements present in the Agnihotra Ash make a
constituent in metaloenzymes. Ash contents provide almost all metals required
in healing cascade.

Would be good if this experiment could be repeated with following changes:

a) Also comparing whether Control Ash (which you get by burning the same
ingredients as used for Agnihotra but without the disciplines of Agnihotra) has
some effect also, and if so, how does it compare to Agnihotra Ash.

b) In addition to using Agnihotra Ash also perform Agnihotra next to the aquarium.
Then of course the control should be kept ideally at least three kilometres away.
Always healing effect is best if both Agnihotra Ash is taken and Agnihotra also
performed.

There are not many studies regarding other animals than the three farmer’s best friends
(cows, bees, and earthworms) and fish. Some results about miscellaneous animals were
reported in the previous article on biodiversity.