Fukushima has dramatically demonstrated that no longer is nuclear radiation poisoning a hypothetical threat to the health of all living beings.
Chernobyl and some other nuclear accidents should have been enough warnings. But now, Fukushima makes it urgent that any and all means to survive be tried.
The article below contains very interesting information on the effects of Agnihotra and Agnihotra ash on problems caused by nuclear radiation.

When Agnihotra is performed, the Agnihotra smoke gathers particles of harmful radiation in the atmosphere and, on a very subtle level, neutralizes their radioactive effect. Nothing is destroyed, merely changed. (Vasant V. Paranjpe, Homa Therapy – Our Last Chance, p.21)

Till now we have covered beneficial effects of Agnihotra and Agnihotra Ash on air, soil, and water resources. But there is one more environmental threat affects all these areas and is especially dangerous as we do not detect it with our senses: This is radioactivity. Radioactivity became a problem on large scale during the second world war when the world saw the fatal destruction in Hiroshima and Nagasaki. After that there were several accidents in nuclear plants (not all of them known to public), the worst were those in Tchernobyl and in Fukushima. But there also was radioactive contamination by use of depleted uranium in bombs in different wars around the globe. Radioactive pollution has thus become a worldwide problem, now the West Coast of U.S. is affected by winds and the waters of the Pacific Ocean bringing radioactive substances from the Fukushima catastrophe.

For biological, physical, and chemical pollution there are ways to degrade harmful substances. But if some substance is radioactive, you can heat it, you can try all kinds of chemical treatments, you can hammer on it or put high pressure – radioactivity is not affected by any of these measures. This is why normally radioactive substances have to be stored away for many generations, some substances even for thousands of years (depending on the half life of the isotopes contained).

In short you can say that radioactive radiation is one of the biggest environmental threats nowadays, and modern science does not have a solution for that. On this background it is really astonishing to see what Agnihotra and Homa Therapy could achieve.

The first observation was made on a Homa Farm in Austria after the Chernobyl catastrophe.

“I had a farm in Kirchberg an der Raab, Styria, Austria in 1986 when the Chernobyl accident happened.

Immediately after the Chernobyl accident the Austrian Government issued instructions that samples of all milk and fodder in our area should be tested for radioactivity.

Scientists were shocked to find that milk and fodder on my farm had normal radioactivity while all the surrounding farms had much higher radioactivity.”

After that observation scientists from Eastern Europe were conducting experiments on the effect of Agnihotra and Agnihotra Ash on radioactivity. The leading physicist of that group, Miro Haber, stated the following as a résumé of this research:

“In physiological terms the body constantly exchanges all its elements (not cells). There are only some exceptions, like the lenses of the eyes and some parts of the nervous system. The mechanism of this exchange of elements in the body is not exactly known. For this exchange the body constantly needs elements like calcium, copper, iron etc. As long as these elements are not radioactive the body functions normally. Our body can deal well with the natural radioactivity which has been existing since millions of years on this planet. However, since the Chernobyl accident we are dealing with a much increased manmade radioactivity. Many radioactive elements like Caesium, Iodine, Ferric etc. have fallen onto this earth. The half-life period of these isotopes is rather high for some of them. They went from the air into the earth, from there into our food – salads vegetables, fruits. Through our food we absorb radioactive elements. This is because our body cannot distinguish whether an element is radioactive or not, and thus it absorbs the element without selection. Once a radioactive element is stored in the body it radiates all the time (like a lighthouse) and destroys the cells in its surroundings. The body reacts with an infection (with luck the radioactive element is thereby thrown out of the body) or it reacts with a tumor, with cancer.

Now where do we get these non-radioactive elements from in order to protect our body? The experiment that was conducted some time ago has shown that the Agnihotra ash (which at the time was produced by about 40 participants according to special directions of Mister Haber) was not radioactive, even though the ingredients were radioactive.

How this mechanism of changing radioactive elements into non-radioactive elements works we do not yet understand. It cannot be explained neither by modern chemistry nor by physics. But the result has been tested several times with always the same outcome: The Agnihotra ash just had natural radioactivity.

Also the Agnihotra ash contains all the 92 natural chemical elements. In this way the body’s total requirement can be covered.

Therefore it is suggested to everybody to eat say a teaspoon of Agnihotra ash before every meal. Most important is in the morning. An easier way would be to make tablets from the ash which can easily be taken (as people are used to take tablets).“

After the Fukushima catastrophe, an experiment was done in the Physics Institute of Academy of Science, Kiev, Ukraine (formerly part of Soviet Union).

Japanese rice from Fukushima area contaminated with radioactive isotopes Cs-137 and Cs-134 (the radioactivity was about 200 Bq/kg) was taken in a quantity of 50 grams and mixed with a water solution of Agnihotra ash – one spoon in one litre of water.

Spectrometric measurements of the mix of water, Agnihotra ash and radioactive rice were conducted in a device “Food Light” which allows to measure levels of radioactivity in short time.

Then during the next days, third and fourth, the radioactive level of the sample went down to about 160 Bq/kg. 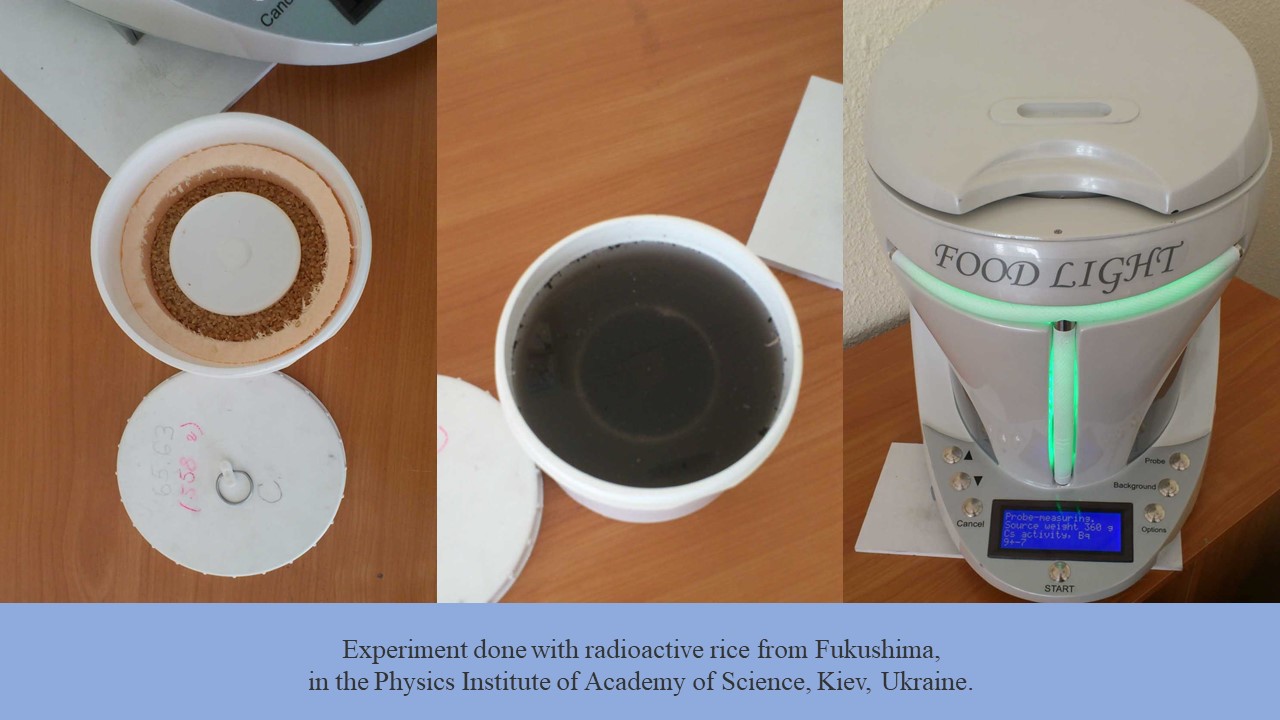 It is advisable to take Agnihotra Ash at least three times per day, preferably before the meals. Also good to soak food like vegetables and fruits in Agnihotra Ash water overnight before eating.

We are planning for Homa Organic Farm project close to the wrecked reactors near Fukushima, Japan, and see how these ancient techniques can help to neutralize radioactivity in soil, water, and atmosphere and bring Nature back to harmony.